A quick note on the color scheme. I cannot control the link colors. It is an artifact of Word. I’ve tried to get Blogger to change the link colors and it refuses to do so. If anyone has any ideas, let me know.

Ashley Smithwick and the Paring Knife

Posted on December 31, 2010 by Sean D. Sorrentino | 4 comments
What a fine example of leftist thought
I asked if he actually believed there could be a Christian method of slaughtering people in combat, or a Christian way of firebombing cities, or a way to kill civilians in the name of Jesus. Did he think that if enough Notre Dame graduates became soldiers that the military would eventually embrace Christ’s teaching of loving one’s enemies?
Who is this clown?
Colman McCarthy, a former Post columnist, directs the Center for Teaching Peace in Washington and teaches courses on nonviolence at four area universities and two high schools.
Oh, another living vector for the dead hand of Communism. Time to face the facts. The “Peace” movement was just a Communist led surrender movement.
“But there is only one guaranteed way you can have peace, and you can have it in the next second. Surrender.”

Does stupidity have to rear it’s head so closely?

Posted on December 30, 2010 by Sean D. Sorrentino | Comments Off on Does stupidity have to rear it’s head so closely?

There’s a proposed ordinance in Johnston County to ban firing basically every projectile weapon within 200 yards of an occupied dwelling. So your kid shooting a pellet gun gets a 20 cop beatdown like the guy in Nebraska. Johnston County is about 2 miles down the road from me, and probably where I’ll move next. I’m not sure that I’ll ever have the money to buy land enough to have 600 feet between me and a neighbor.

Comments Off on Does stupidity have to rear it’s head so closely?

Posted on December 26, 2010 by Sean D. Sorrentino | Comments Off on Southern Snow
This doesn’t look like much snow
﻿ 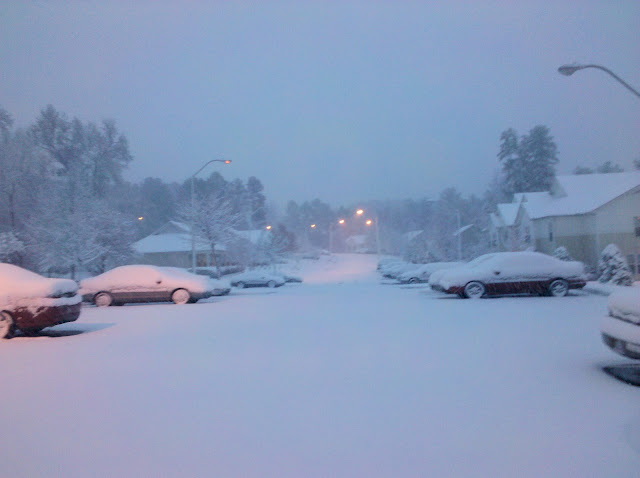 Until you realize that it is in Raleigh, North Carolina 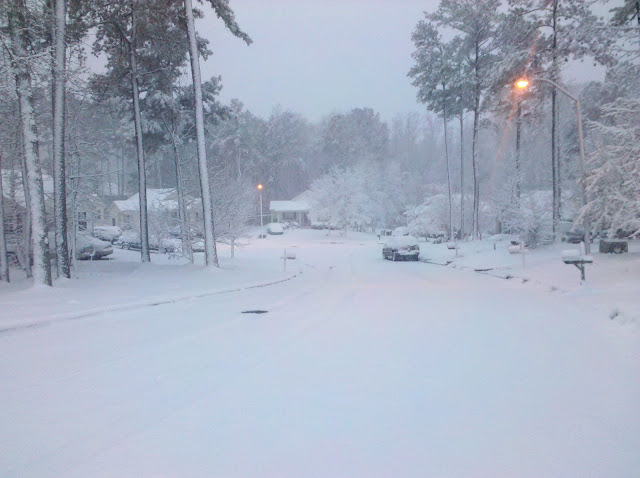 Comments Off on Southern Snow

Once you are approved, you can buy a gun

Posted on December 25, 2010 by Sean D. Sorrentino | Comments Off on Once you are approved, you can buy a gun
This starts off ok
DEERFIELD (NY) — You want a pistol license? You’re not alone. Hundreds of people do.
Yeah, of course more people want a pistol license. More and more people are learning that carrying a gun is legal and possible for the average citizen.
Dan Sullivan, Oneida County’s assistant pistol license officer, said 528 people were granted pistol licenses in 2009. This year, the number will be about the same.
Wow, that seems kind of low. 528 licenses for Oneida County? Out of 235,469 people, (2000 Census) Lehigh County, PA, has 312,090, and in 2007 issued 2880. This means that as a percentage of population, Oneida County is issuing pistol permits at a rate of less than ¼ of the rate of Lehigh County.
You can’t just go pick up a pistol license. Oneida County Judge Michael Dwyer, the county’s chief pistol license officer, requires prospective applicants to complete the first eight hours of the National Rifle Association basic pistol course.
“After that, you can make an appointment to be fingerprinted, and it’s a four-month process (background checks and more),” Sullivan said.
Yeah, I know. It’s a NC class, $90, and 90 day wait for an NC Concealed Handgun License
“Once you are approved, you can buy a gun.”
WTF!!!! You have to do all of this the BUY a pistol? Who the hell do these people think they are? According to the Oneida County website, the majority of licenses are “Restricted” which means that they are only for “Hunting, Target, Camping and Hiking, (PDF)” not for “Full Carry”
5.*To Receive a “full carry” license or “unrestricted” license,  It is solely the licensing officers decision as to whether the applicant has demonstrated proper cause for the issuance of a unrestricted license.  As per PL400.(2)(F).   Additional training is not required to receive a pistol license.
Well, that’s a relief, you don’t need any extra training. You just have to be politically connected.
This is insane. A citizen should be able to walk up to any gun store and plunk down cash and receive a pistol in return. Who died and left these jokers in charge? Luckily, the Second Amendment Foundation is on the case.
Ht: The War on Guns

Comments Off on Once you are approved, you can buy a gun

Mugabe and the White African

Posted on December 24, 2010 by Sean D. Sorrentino | Comments Off on Mugabe and the White African

This movie is a real downer

This clip makes it look like there is a gun battle about to happen. In fact, throughout the documentary I keep expecting a gunfight to break out. There is no shortage of people that fall into the “He needed killin’” category, but they keep praying and not slaying. The movie would have been a lot shorter with me as the protagonist. One man would probably not make it against the entire ZANU-PF militia, but I’d have been shooting after the first 10 minutes. Like this guy.
Long story short, they threaten the guy and order him off his land and he tries to take the Government of Zimbabwe to court. The court delays and delays and delays. They get beat to a pulp. The court rules in their favor, and then thugs overrun the farm and burn it to the ground.
Here’s a tip. All power is force. Any “power” that lacks the force necessary to require compliance is not power at all. A bunch of guys in pretty robes may make any “ruling” they like, but since they lack an army to shoot anyone who violates that ruling, they are pretty much worthless.

Comments Off on Mugabe and the White African

Posted on December 23, 2010 by Sean D. Sorrentino | Comments Off on Bev needs to take guns off the table in her re-election campaign
It’s almost 2 years until NC Gov Bev Perdue is up for re-election. Can you believe that there are polls out already? Unfortunately for Governor Perdue, she’s polling badly against Pat McCrory (whoever the hell he is)
Although the next election is not until 2012, Republican Pat McCrory leads Democratic Gov. Bev Perdue by 15 percent, according to a new poll released today by the Civitas Institute.
According to the live caller poll of 600 likely voters, 51 percent of voters said they would vote for McCrory if the election for Governor were held today.  Thirty-six percent said they would vote for Perdue, and 12 percent said they are undecided.
Carolina Politics Online, has this to say about the poll numbers

Two years out. I know it doesn’t mean much. But still… wow. This says a lot about Perdue. She’s had two years to impress, and people just aren’t feelin’ the Perdue magic.
So what does that mean for gun rights here in North Carolina, where the ENTIRE General Assembly went to the Republican party in the November elections? Hopefully it means that Bev Perdue finds herself stuck between a rock and a hard place when it comes to signing any pro-gun bills that show up on her desk. Were I in charge of shepherding gun law reforms through to her office, I would make sure she understands that vetoing pro-gun bills will make her even less electable than she currently is. On the other hand, if she were to sign sweeping reforms of the current mess we have, she would be in a good position to take the gun control issue off the table come 2012. It would also mean that if she has any designs on running for President, she could pre-empt any attacks on her by being the Governor who signed serious pro-gun reform into law.
So if there are any Republican pols reading, I say, go for it. Bring it all to the table. Repeal the entire law against concealed carry of a weapon and go for Constitutional Carry in NC. There’s no reason that North Carolina should have fewer freedoms than Vermont, Arizona, and Alaska.
Here’s my policy prescription for North Carolina so far
1.       State of Emergency
2.       Police officer notification
3.       Guns in restaurants
4.       Random Checkpoints
5.       Purchase Permits
6.       Guns and Assemblies
7.       Guns and Parades
8.       Larceny of Pine Straw and other silly felonies
9.       Concealed knives
10.   A REAL pre-emption law
11.   Crossbow permits
12.   Guns in State Parks
13.   Redistricting
14.   Safe Storage laws
Ht: Carolina Politics Online

Not the usual fare, suicide among men

Posted on December 22, 2010 by Sean D. Sorrentino | Comments Off on Not the usual fare, suicide among men
Remember this graphic?

See how many of the “gun deaths” are suicides?
Added to that, there’s this.
That is why divorced men are far more likely to kill themselves than divorced women. I’ve seen this up close and real personal this past week. My long time high school buddy is now just another statistic. A statistic that is casually dismissed by gyno-centric researchers as the man’s fault for not building up strong enough social networks and the male’s inability to “communicate.”
Remember that the professional Left wants things to be this way. To them, suicide is not a bug, it’s a feature. It gets rid of the independent men, the ones who are likely to argue with the leftist Nanny State. It also gets rid of them in a way that their dead bodies can be used to advance the cause of citizen disarmament.
This poor guy is now just another “gun death,” in whose blood our opponents will dance while calling for more and more restrictions on our right to keep and bear arms. Read the whole thing, and see for yourself if his suicide was the result of “easy access to guns,” or legal rape of his entire life.
Ht: Dr. Helen

Comments Off on Not the usual fare, suicide among men

It’s a human right, even in Turkey

Posted on December 21, 2010 by Sean D. Sorrentino | Comments Off on It’s a human right, even in Turkey
Even in Turkey, gun control is being challenged.
But Cuma İçten, the chairman of the Weapon Producers, Sellers and Lovers Association (SÜSASD), claims that a weapon is a basic human right, saying: “It is expensive for the state to protect every citizen. But self-defense is a right for everyone. It is easy for illegal organizations have weapons, so upstanding citizens should be given the same right.”
The Weapon Producers, Sellers, and Lovers Association. Gotta love an organization that proclaims its love of weapons. It’s still a tough fight though
Hülya Gülbahar from the Association for Education and Supporting Women Candidates (KA-DER) underlined that women and children are the main victims of such laws and easy access to guns. “The men possessing weapons in uniform or not in uniform are the main threat to the lives of women. These weapons are used at home against women, largely as means to threaten [women]. When it comes to rape, forcing women to agree to divorce or taking away their right to have a say in family matters, guns are widely used. Children also die when playing with them,” she told Today’s Zaman.
Jeez. It sounds like the pants wetters we have here. Slowly we are winning. One day we will have a world where everyone recognizes that self defense is a human right.
Ht The Bluff
Update: And in India too…
“Everyone’s life is precious. And everyone has the right to defend their life and liberty. And that right is meaningless without the means to do so,” said Abhijeet Singh.

Comments Off on It’s a human right, even in Turkey