The “Build it Yourself” loophole

Posted on December 17, 2010 by Sean D. Sorrentino | 3 Comments
Colin Goddard is running around whining that the government has not yet closed the “Gun Show Loophole.” This “loophole” in the law means that citizens may sell their firearms to other citizens without either a Brady NICS check or filling out a Form 4473.
No Background Check, No Gun, No Excuses. Colin Goddard, Survived VA Tech and plans on spending the rest of his life whining about it Virginia Tech survivor

In short, it means that if I want to sell my rifle to my next door neighbor, it’s legal. The Brady Campaign wants to make that illegal, because my next door neighbor might be a criminal. They like to call it the “Gun Show” loophole since calling it the “OMG, you might sell your gun to your neighbor who might be a criminal” loophole is pretty cumbersome, and focus groups full of hoplophobes said the Gun Shows were scary.


You may be aware that you can purchase basically every part of the standard AR-15 rifle online. Barrels, bolts, stocks, sights, whatever. Brownells has turned this into a business model. 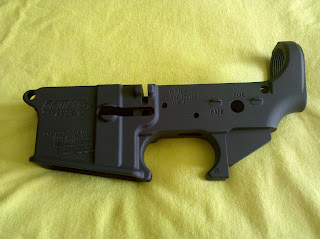 This is a photo of my lower receiver. I have not put it together yet because I don’t yet have enough money for the rest of the parts. (I take checks, cash, PayPal or money orders. Donations are not tax deductable) 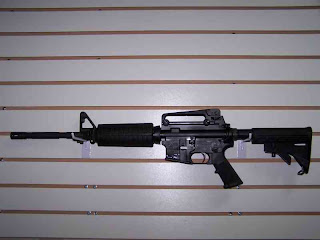 This is a standard, generic AR-15 on the rack at any gun store. You can go online and buy every single part necessary to turn photo #1 into photo #2.
“Not a problem,” say the Bradys. (let’s take them at their word, even though we know they are lying) “You still have to get a background check to buy that lower receiver thingy, so we’re ok with that. “
Not so fast.
Wait until they find out about the newest, latest, most extreme loophole imaginable. I call it the “Build it Yourself” loophole. Did you know that there is no law that prohibits you from building a firearm yourself, for your own personal use, without permission from any government? I’m not talking about assembling the parts of an AR, I’m talking about actually building the lower receiver yourself! It’s true. You actually only need a Federal Firearms license if you want to sell firearms. If you build guns to sell, or if you are engaged in the buying and selling of firearms as a business, then you need an FFL. If you are building only for yourself, no license needed. It’s like brewing beer for home consumption.
“But that’s got to be difficult and time consuming.” The Bradys might say.
Not really.
For $185, anyone can buy a jig plus the slug of metal needed to machine yourself an AR-15 lower receiver. ANYONE. Even felons could buy this kit. If they completed the lower, they would be breaking the law, but since the 80% lower receiver is not a firearm, according to the ATF, there is no problem selling it to anyone. All you need is access to a standard bit of machine shop equipment and some time to figure things out, and you can turn this 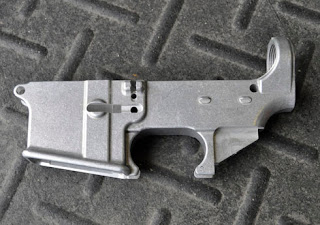 ﻿with no laws broken. Don’t tell the Brady Campaign. They’d have a spazz attack if they found out how easy building an AR-15 receiver actually was.
The genie is out of the bottle. There’s no sense trying to stuff the cork back in. Gun bans and background checks, and basically every other gun control law ever created will only control those people who listen to and respect the law. The people who aren’t allowed to own guns have already demonstrated that they have no respect for the law.
UPDATE: I’d like to add, for more PSH from the gun grabbers, that if you make the gun yourself, there is no requirement in the law for you to put a serial number on it.

This entry was posted in Colin Goddard is wrong. Bookmark the permalink.

3 responses to “The “Build it Yourself” loophole”