Doctors are not trained in that

Posted on April 30, 2011 by Sean D. Sorrentino | 6 comments
About.com is a hive of suck and fail. It’s basically useless except for finding the latest irrelevant web ads. Imagine my surprise when I find this foolish screed from a pediatrician who is incensed that he isn’t invited to give his ignorant advice about guns to parents.
This contrasts with what AAP President O. Marion Burton, MD, FAAP says about the Florida gun bill – “This bill is a harmful, unnecessary, and unprecedented government intrusion into the patient-physician relationship. Restricting the type of conversations that physicians can have with patients not only violates physician professional standards and clearly flies in the face of our First Amendment rights to free speech, but gravely threatens the health and well-being of patients. Similar legislation has already been proposed in other states, and we urge leaders in Alabama, North Carolina and elsewhere to reject these bills outright.”
Now no one comes to me asking if that pesky chest pain is heartburn or a heart attack. Who would be stupid enough to ask (or listen) to a doctor about gun safety? Now consider what the American Academy of Pediatrics considers good gun advice
The best way to keep your children safe from injury or death from guns is to NEVER have a gun in the home.
·         Do not purchase a gun, especially a handgun.
·         Remove all guns present in the home.
·         Talk to your children about the dangers of guns, and tell them to stay away from guns.
·         Find out if there are guns in the homes where your children play. If so, talk to the adults in the house about the dangers of guns to their families.
Luckily, no doctor has ever been stupid enough to try to talk to me about guns. My current doctor is a flaming libertarian. I think he has his own Wookie suit. I have a ready answer if ever run into the other sort of doctor.
FIREARMS SAFETY COUNSELING REPRESENTATION: (PDF)
Malpractice insurance is a bitch.

Posted on April 30, 2011 by Sean D. Sorrentino | 1 comment
So what happens when you lie on Twitter? You get slapped down hard. What happens when you’re outnumbered on Twitter 10 to 1 and you lie? You get bitch slapped hard, fast, and often.
The Coalition to Stop Gun Violence Ownership has spent quite a bit of time making up stupid things to say on Twitter, and various gun bloggers have had a fun time slapping them down. Well CSGV couldn’t have that. Today, the first day of the NRA Convention, after spending a lot of time calling for a “GunConversation,” they just blocked us. I guess they didn’t like what we had to say.
Here’s a clue-by-four. If your claim is that gun owners are a small minority, and that gun control supporters are a large majority, you shouldn’t be outnumbered in blogs and on Twitter by several orders of magnitude. It’s one thing to be a fringe wacko. It’s quite another to be a fringe wacko who’s being an obnoxious ass while trying to infringe on other people’s rights.
On a side note, if you want, you can follow me on Twitter. I’m not very good at argument by haiku, but it’s entertaining.

Well it didn’t take this guy long to screw up

Posted on April 30, 2011 by Sean D. Sorrentino | 4 comments
For the last week or so, Fayetteville was plagued by the “Box cutter Bandit”
Julius Williams III, 50, of the 500 block of Rock Canyon Drive, was charged Friday with three counts each of robbery with a dangerous weapon and second-degree kidnapping and one count of common law robbery.
So how did the cops get their suspect?
Williams was charged in 1992 with nine robberies that were similar to the more recent ones, Davis said.
When Williams appeared in court in 1992, he was sentenced to 45 years in prison, Davis said.
One officer recalled a suspect in cases 18 years ago involving a person who committed similar crimes, Davis said, but could only remember the suspect’s first name.
While doing research officers found the records for Williams, who was released from prison in July after serving almost 18 of the 45 years, Davis said.
Then, another officer found a missing persons report that Williams’ mother filed Wednesday, Davis said.
As I’ve said, leopards don’t change their spots. He was out less than a year before he got back to his old ways.
Here’s his record.
Here’s proof that he couldn’t even follow the rules in jail.
So let me get this straight. They sentenced this guy to a pretty stiff 45 years, but they let him out after only 18 years? Less than half?

Two criminals with the same name?

Posted on April 29, 2011 by Sean D. Sorrentino | 1 comment
Naturally the gun grabbers will blame the gun for this one
The victim of a Monday abduction told an emergency dispatcher that she ran from her attacker after he told her he was going to shoot her.
The 22-year-old East Carolina University student said the man had a knife and gun, touched her inappropriately and forced her to have oral sex at the dead end of Country Club Drive.
“He got out his gun and he said he was going to shoot me and I just ran,” the woman said.
They’ll blame the gun, but what about the wielder?
Brown has several previous convictions and has served prison time.
Undoubtedly they will say that preventing honest citizens from owning guns will somehow magically keep thugs from raping students.
The story identifies the rapist as being 17. Strangely there is another person with the exact same name in the same county, who is 37. Are they misidentifying him? Or is this other person the accused’s father? 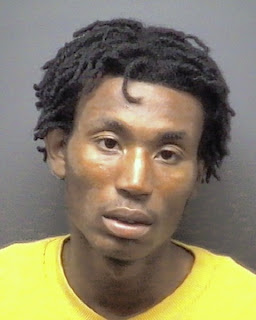 A good addition to the “More Women Carrying” meme

Posted on April 28, 2011 by Sean D. Sorrentino | 1 comment
While I think that anyone who intentionally uses the term “Packing Heat” should be paddled severely by the League for the Elimination of Stupid Phrases, this article paints a pretty nice story.
Moore, a RE/MAX Executive Realty agent, knows others in the business who carry handguns as well. Women, possibly spurred on by the news of attacks on female agents, make up eight of the 10 agents in her office who hold permits.
Real Estate agents are in a uniquely dangerous situation. They are isolated inside empty houses with unknown people. I am pretty sure that the agent that showed me this house had a pistol in her purse. The next door neighbor had an intact male pit bull loose in his front yard with no one watching it. My agent made it clear that she was able to handle it should that become necessary. Since she was 5’4” 120 lbs, and lacking in any obvious dog wrestling skills, I assume that meant that I wasn’t the only one carrying a pistol.
Look at this photo. 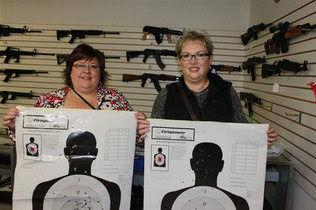 Anyone who would deny these ladies a fighting chance is a heartless bastard, and no better than the thugs and criminals who would attack them.
This is why we win.

Posted in For the ladies, Gun rights philosophy, Mythbusting

Posted on April 28, 2011 by Sean D. Sorrentino | Comments Off on Update: Mr. Neck Tattoo who can’t shoot straight has been captured
A happy update on our idiotically tattooed shooting suspect from yesterday.
Authorities today captured a suspect wanted for allegedly trying to shoot a man to death.
Parish Dewight Suber, 22, of Shiloh Road, was considered armed and dangerous, said Lt. Randy Sorrells of the Buncombe County Sheriff’s Office.
We’ve already discussed the shooter’s previous record.
Here’s the victim’s record. What do I keep telling people? Most murders are drug related. Luckily for the victim, he survived unscathed.

Comments Off on Update: Mr. Neck Tattoo who can’t shoot straight has been captured

Not a felon. I wonder why not.

Posted on April 28, 2011 by Sean D. Sorrentino | 1 comment
It looks like this clown finally succeeded in committing a felony.
Police arrested Martin Dee Wayne Evans, 19, of Brookhollow Road in Efland, on Tuesday and charged him with the first-degree murder of Carl Lewis Powell of Danube Lane, Durham.
He’s apparently a one man crime wave.
Evans is also been charged with misdemeanor breaking and entering and second-degree trespassing in connection with an unrelated domestic incident that was reported to Durham police Tuesday afternoon.

Anyone from the Raleigh/Durham/Chapel Hill Area going to the NRA convention?

Posted on April 27, 2011 by Sean D. Sorrentino | Comments Off on Anyone from the Raleigh/Durham/Chapel Hill Area going to the NRA convention?

Is anyone from the Triangle going to the NRA Convention? I have something that needs to carried up there, but I can’t go.

If you are going, please email me and we can discuss arrangements.

Comments Off on Anyone from the Raleigh/Durham/Chapel Hill Area going to the NRA convention?

Gun leaps up and attempts murder!

Posted on April 27, 2011 by Sean D. Sorrentino | Comments Off on Gun leaps up and attempts murder!
It must have been the gun’s fault. Why else would an 18 year old be in trouble for attempted murder?
A Raleigh teen is in jail today facing charges of attempted murder and assault with a deadly weapon with intent to kill inflicting serious injury, authorities said.
Raleigh police arrested Tyquon Devoeta Meggett, 18, on Monday and charged him in the shooting of Rashaad A. McKnight last week, according to arrest warrants filed in the Wake County Magistrate’s Office.
We need to quickly blame the gun here and don’t let anyone look at the records of the accused or the victim.
Accused
Victim
Don’t tell anyone.

Comments Off on Gun leaps up and attempts murder!

With a tattoo like that, you know he’s up to no good

Posted on April 27, 2011 by Sean D. Sorrentino | 4 comments
Buncombe County Sheriff’s Office is looking for another choir boy who, in a fit of road rage, snapped and fired his gun at another motorist.
(Suspect) fired six rounds into a vehicle Friday as it was exiting the parking lot of the Ice Service Store onto N. Louisiana Avenue, Sorrells said. No one was injured.
“He’s just a bad shot or didn’t hit what he was aiming at,” the deputy said.
Just look at this photo. You can clearly see that he is a fine, upstanding youth. It’s hard to imagine that someone with such a sweet face could possibly be involved in such a heinous crime. 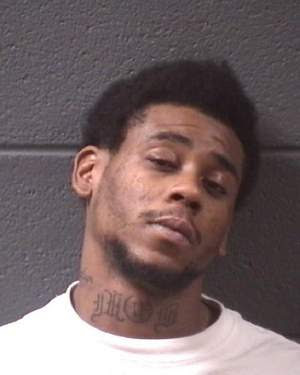 (Suspect)’s College Transcripts
This just goes to show that guns, in the hands of motorists, leads to violence.  The evil gun lobby is directly responsible for this yute possessing a firearm. After all, why else would a simple disagreement between honest citizens lead to shooting?
(Suspect) was released from prison in January 2010 after serving a year and eight months on a charge of possession of a firearm by a felon, according to N.C. Department of Correction records. His previous convictions also include illegal drug possession, possessing stolen goods, speeding to elude arrest and breaking and entering.
Nevermind.