Posted on May 21, 2011 by Sean D. Sorrentino | 3 Comments
Here’s a post that will show you two things. First, that often the victims of crime are the same group of people who commit crimes. This stands to reason as people who are too lazy to get a job are often too lazy to look outside their own group for suitable victims. The second thing that you can learn from this post is some basic internet research tactics.
A man was stabbed early Friday morning in Wilmington, NC
Officers had difficultly nailing down exactly what happened to a man found stabbed in his back, neck and arm early Friday morning on Wilmington’s Castle Street as the victim gave police conflicting accounts of the crime, a police spokeswoman said.
Read the whole story. Note that the story does not give the name of the victim. This is often the case. It does, however, give you a street address of the crime. The responding agency appears to be the Wilmington Police Department, so I went to the Wilmington PD’s website and used their “Search for Events” feature. By plugging in the date and the street, I received this police report. 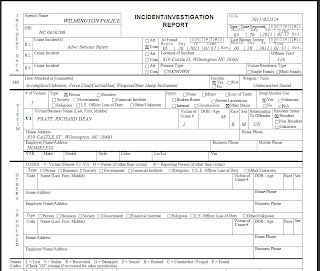 The report gives me the crime, Assault w/Deadly Weapon Inflicting Serious Injury, the time, address, and the victim’s name. It also tells me that the victim is homeless and that alcohol was involved. In addition, it tells me that the victim is a black male, 48 years old.
I take that info and enter it into the Department of Corrections website and it spits out this guy. Habitual felon, Drugs, DWI, Assault on a Female, Driver’s license permanently revoked, Larceny by Public Employee. He only just got out of prison in October after over 7 years. And here he is, drunk, homeless, and getting stabbed.
This info is already out there. The reporters frequently only tell you half the story. I mean, anyone could get drunk and stabbed in Wilmington. Did the reporter leave out the fact that the victim was a convicted felon just out of prison because he didn’t know? Or because he didn’t think you should know?
Let’s be clear about some things. Just because someone’s a felon doesn’t mean that crimes committed against them are any less serious. It’s also not blaming the victim to point out that he was drunk at 1am on a pretty seedy looking street, and that he’s homeless after being out of jail just over 6 months. Drunk, stumbling down a seedy looking street pretty much defines “Condition White.”
One more thing you can learn from this story. Once you give your life to drugs and alcohol, forever will it dominate your destiny. I want drugs to be decriminalized. I think that the benefits will outweigh the costs. But this man is an example of what they cost. His life appears to have been wasted because of drugs and alcohol.

This entry was posted in Felons Behaving Badly, Navel Gazing. Bookmark the permalink.