How far is 25 meters anyway?

Posted on October 24, 2011 by Sean D. Sorrentino | 2 Comments
I have to say, shooting from retention (the hip, really) and then backing up while blasting away at the target is a lot of fun. God help anyone who makes that necessary, because they are in for a world of hurt. The problem is that it really doesn’t teach you how to shoot well.
A group of bloggers and our friends took a one day Introductory Pistol class at TigerSwan on Saturday. I have taken the class before, so I knew what I was in for. The other guys had about the same reaction I had the first time I saw what we were faced with. We stepped up to the line and looked at our targets.

This is a standard NRA B-8 target. We came for a class on Tactical Shooting, and we got a bullseye. What was worse, they stuck the bullseye at 25 meters. If you’ve never tried to shoot for accuracy at 25 meters, it’s a humbling experience. As they liked to say, everyone can shoot like a rock star at 7 yards. When you stretch out that distance to 25 meters, little problems like poor sight alignment, poor trigger control, weak or incorrect grip, and lack of follow through make a big difference. They just sort of leap out at you.

There’s one other thing that shooting a bullseye at 25 meters does for you. When you step up to a USPSA standard silhouette at 10 meters, it becomes an easy shot. 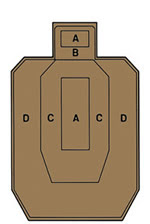 After two hours of shooting at a B-8 target, you’ve redefined what you think of as accurate. You are unhappy with yourself for missing the A-Zone when only 2 hours ago you would have been perfectly happy to have hit the cardboard.
I can’t wait until I start to get emails from the other shooters telling me that when they went to their home range and ran the target all the way out, it was still too close. That’s certainly how I felt after finishing the class last time.
The last half of the class we spent on target transitions, tempo changes, even extreme transitions of more than 120 degrees of arc. But the most fun was shooting from retention. Weak hand up and protect the head, pistol clear of the holster and three quick shots to the pelvis. Back up at an angle, arms extended, firing (and easily hitting) center mass. Like I said, God help anyone I ever need to use that particular skill on. But in the end, it was the icing on the cake after I had finished the meat, potatoes, and my veggies.
========================================================================
Do you RSS? Don’t know what an RSS Feed is?
Watch this video

This entry was posted in Blogmeet. Bookmark the permalink.