Posted on January 31, 2012 by Sean D. Sorrentino | 2 comments
You know, there’s a hierarchy of criminal behavior. At the bottom are the sex crimes. Child molesting, rape, that sort of thing. Right above that is murder. Some would argue that those positions should be reversed, but I would still rather be thought a murderer than a rapist or child molester.
Somewhere near the bottom are people like this guy.
Raeford police have arrested one of two men they believe robbed a Domino’s Pizza delivery man earlier this month.
Robbing the pizza guy is pretty awful behavior. Some guy, out to make a few bucks delivering tasty happiness in a box should not have to worry that a couple of douche bags will try to stick him up for his tip money and a pizza. I would advocate for the death penalty for pizza delivery person robbers. Targeting the people who bring my dinner means fewer people will do the job, leading to higher costs and longer wait times. Robbing the pizza guy isn’t just robbing the pizza guy. It’s robbing all of us.
Suspect
And here’s proof that he’s a serial lowlife.
I suggest that he be locked up for a very long time with no pizza. Or only pizza with anchovies, whichever he likes least.

What’s with driving off the road to hurt a passenger?

Posted on January 31, 2012 by Sean D. Sorrentino | 1 comment
Here’s a crime I don’t get. Let’s say you’ve got a passenger that pisses you off. Why would you drive off the road to hurt that passenger? Wouldn’t you get hurt at the same time?
An 23-year-old Durham man was arrested in Raleigh on Sunday after police say he intentionally drove off a road to hurt his passenger.
Raleigh police said Prince Rogers crashed into a grove of trees in the 5900 block of Lead Mine Road around 7:20 p.m.
He’s facing a whole slew of charges over this stupid idea.
Suspect
But it doesn’t look like he’s the sort of person who stops to think about the consequences of his actions.
Criminals are stupid. They don’t care about the harm they cause others. This clown doesn’t even stop to think about the harm he causes himself.

Posted on January 31, 2012 by Sean D. Sorrentino | Comments Off on Meanwhile in Rebecca Peters Paradise: I’m Not Talking edition
I don’t know about you, but if someone shot me in the back, I would tell the cops everything I knew about my attacker.
A MAN was charged yesterday as an accessory to a shooting in Sydney’ on Thursday night after the teenage victim, who was shot in the back, allegedly refused to provide police with a formal statement.
As the Attorney-General, Greg Smith, rejects suggestions he is soft on crime, police say they continue to be frustrated with a lack of co-operation from victims and witnesses to a recent spate of shootings.
This is despite police now having the backing of the NSW Crime Commission to help compel witnesses to assist with their inquiries.

Compel witnesses to assist? Are they going to break out the rubber hoses? It’s nice to see that it isn’t just America that is destroying civil liberties in their rush to lose the war on drugs.

So, where did the criminals get a gun to shoot the victim? Aren’t they supposed to spend hours begging the cops for permission and then have to wait a long time for the paperwork to clear? Don’t they have to establish that they are shooting club members? Or is that just the procedure for the law abiding citizens? The criminals can just smuggle the guns in with the drugs.

Comments Off on Meanwhile in Rebecca Peters Paradise: I’m Not Talking edition

Does anyone know if this meets the legal definition of extortion?

Posted on January 31, 2012 by Sean D. Sorrentino | 5 comments
The leader of the latest sacrificial lamb gun ban organization seems to be trying to extort money from Starbucks.
Fineman said his organization plans to boycott large corporations, including Starbucks and Nike, unless they change their stance on gun violence.
Starbucks, which allows people to openly carry firearms in its stores, must ban the practice and commit $10 million each year to getting sane gun laws passed, he explained, adding that Starbucks made $550 million in profits in 2009.
Is there a lawyer in the house? Does demanding $10 million a year constitute a shakedown? Or can they claim that because Jesse Jackson does it that it’s legal?
Of course, there is always the defense that their threatened boycott is such a laughable idea that it doesn’t constitute a real threat to the company. What with the fact that they had to remove their Facebook “number attending” widget because the actual number was embarrassingly low.
Plus, they can’t be bothered to spell “latte” correctly on their website. 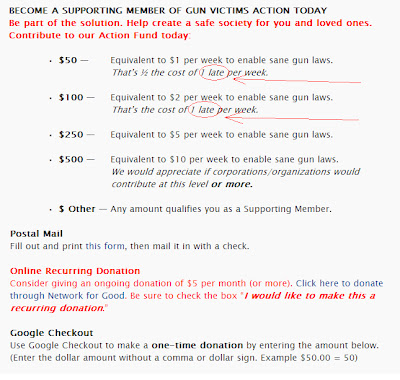 Posted in NGVAC is insane

A sweet and innocent old man?

The Asheville Citizen Times is reporting that a 73 year old man has been arrested on drug charges.

A 73-year-old man was arrested Monday and faces 13 drug-related charges, most for cocaine possession and selling or delivering the controlled substance.
This seems odd. Usually at 73, they should be sitting on the porch in a rocking chair entertaining the grandkids with stories about “the old days.”
Suspect
I bet that old man has some stories to tell. Probably not the ones you want to hear from Grandpa though.

Posted on January 30, 2012 by Sean D. Sorrentino | Comments Off on Meanwhile in Rebecca Peters Paradise: Nine Guns edition
Embarrassed and stung by the rash of shootings in mostly gun free Sydney, the police have arrested two and seized their contraband.
In total, nine guns were seized along with an electronic stun gun, bullets and 70 ecstasy pills.

So please explain to me what good gun control in Australia is if random drug dealers have more guns than they can use?

Posted on January 29, 2012 by Sean D. Sorrentino | 3 comments
Two criminals are now in custody for the cowardly murder of two men in a robbery of a thrift store in Orange County.
The two men charged with robbing a Cedar Grove thrift store on Wednesday and shooting the store owner and a retired deputy will spend the next couple of weeks in prison, held without bond on charges of first-degree murder.
For those from out of state, Chapel Hill, home of UNC-Chapel Hill, is in Orange County, NC.

Watching the video you can see the anger and frustration of one of the victim’s brother. That victim was a retired Deputy Sheriff, one with a great deal of integrity. After his son admitted to killing another person, he bagged up the evidence and marched his son off to the police department to turn him in.
Suspect 1
Suspect 2
And his reward is that he was murdered for less than $200 in a thrift store by two known criminals on active probation.
Like the Deputy’s brother said, no amount of justice can make up for this.
===================================================
Do you RSS? Don’t know what an RSS Feed is?
Watch this video

Meanwhile in Sarah Brady Paradise: They Finally Caught Him edition

Posted on January 29, 2012 by Sean D. Sorrentino | 1 comment
It’s taken them since October of 2008 to catch their suspect, but they’ve finally got him.
Police have charged a man with the murder of a 27-year-old shot dead at the block of flats where he lived in north-west London.
Cima Sogojeva, 27, was discovered by firearms officers at Caroline Court on Highfield Road, near Brent Cross, in October 2008.
So how’s that gun control working out for you guys? Not so well?

More on the dead felon in the hotel (*Video*)

Posted on January 28, 2012 by Sean D. Sorrentino | 1 comment
Well it didn’t take long for the Raleigh Police to track down the suspects for murdering the felon who was shot dead in a hotel on Wednesday.
Raleigh police arrested three men Friday in connection with the death of (Victim), 24, who was found shot to death in a room at the Studio Plus hotel in north Raleigh Thursday.
(Suspect 1), 21, of 1011 Gilby Road in Apex, and (Suspect 2), 25, of 6304-C Linville Drive in Raleigh, are both charged with murder and were being held in the Wake County jail.
(Suspect 3), 35, is charged with accessory after the fact to murder and possession of a firearm by a convicted felon.
It looks drug related, given the backgrounds of the people involved.
Victim
Suspect 2
Suspect 3

Posted on January 28, 2012 by Sean D. Sorrentino | 2 comments
It sounds like the plot to a bad heist movie, but it really happened in Suffolk, England.
A man pointed a gun at the officers at West Suffolk Hospital in Bury St Edmunds at 18:50 GMT. They were forced to release the prisoner, believed to be Andrew Farndon, 26.
Police said they had begun a manhunt for both men, who ran off.
Officers were alerted by hospital staff who could see a man with a gun outside the accident and emergency department.
They said the man was pointing the weapon at two prison officers.
Are you freaking kidding me? In officially handgun free (Formerly Great) Britain, where did someone get a pistol to point at the cops? Isn’t banning handguns supposed to stop gun crime? Or were they just planning on taking the guns away from the law abiding and leaving it at that?