Posted on January 9, 2012 by Sean D. Sorrentino | 2 Comments
The Coalition to Stop Gun Violence Ownership made a strategic mistake today on Facebook. They told the truth. No one said that Ladd was very smart. 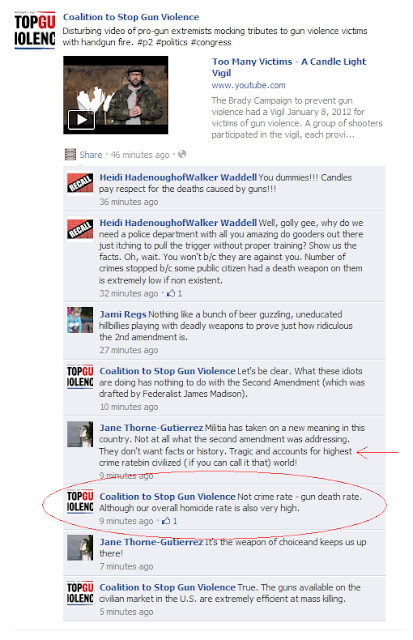 (Click to enlargify)
If you read this, you see that “Coalition to Stop Gun Violence,” which is effectively Ladd Everett the communication director, correcting a commenter. The commenter says that (in her mind) the kind of thinking that led to the linked video is “Tragic and accounts for the highest crime rate in the civilized (if you can call it that) world” [I cleaned up the typos] Ladd responds with “Not crime rate – gun death rate.” And then he allows that “Although our homicide rate is also very high.”
We gun owners have been saying for years that “Gun Death™” is a made up distinction. Now we have actual evidence that even they know it. The fact that death by firearm is such a high number in this country relies on one simple fact. More than half of all “Gun Death™s” are suicide. For a country where guns are not available, the suicidal must pick a different method. The gun control shills bank on people not knowing this. They bank on the average person believing that all these “Gun Death™s” are murders. They have to pitch it that way because if they said, “The US has the 34th highest intentional homicide rate in the world!” no one would pay them any attention much less give them a dime.
The next thing that they try is the whole “civilized” country gambit. They usually try to dress it up a bit by saying “Western Industrialized country not at war,” but it usually amounts to the same thing. What they really mean is “Country where wealthy white people can comfortably vacation.” Or to be brutally honest, “Place without any brown people, and not Russia.” I’m not sure if it was Breda or Tam who calls this the “Tallest midget at the State Fair” gambit.
But still, 34th sounds pretty high. There are lots of countries in the world. So let’s put it in perspective. 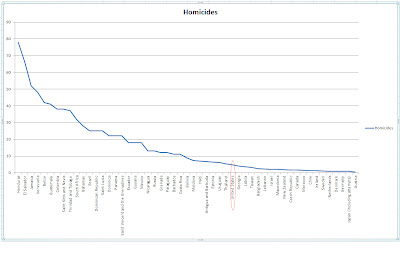 This entry was posted in Gnashing and Wailing, Mythbusting, National Politics, Sean gets Results. Bookmark the permalink.

2 responses to “CSGV tells the truth, mostly by accident”