Posted on February 1, 2012 by Sean D. Sorrentino | 5 Comments
If you haven’t seen it, go and give Ladd Everitt’s post a read. I know, he’s a disgusting troll and we all know that, but still, read his post.
Back? Now read this series of Twitter posts between Sebastian (TBFKASIH) and some loon calling him(her?)self “GunSensus.” 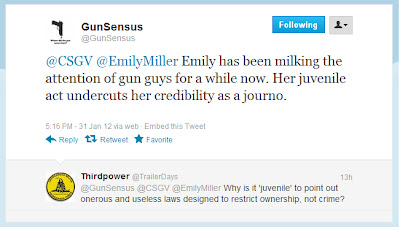 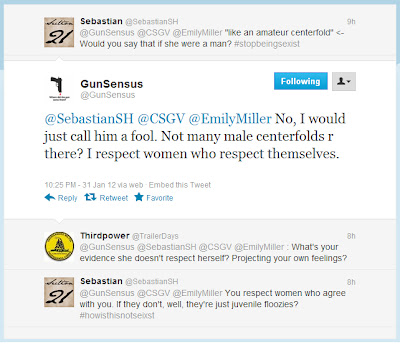 This is the “Nuts and Sluts” defense.
The “nuts and sluts” defense is a common employment law tactic whenever a female employee brings a claim.  It doesn’t matter what the claim is, the defense — after the usual legal mumbo jumbo — will be something like this:
“She’s nuts.  And by the way, pssst, she may be a slut.”
That is the mode of attack Democrats use against conservative women.  Sarah Palin is the prime example, as she routinely is called crazy and is sexualized by the left (to the silence of liberal feminist groups).
So, Ladd thinks that Emily is crazy for complaining that she has to leave the city of DC and travel to the home of a strange man to get training based upon a poorly Xeroxed list. Apparently it’s considered crazy nowadays for a woman to think that a person with a brick and mortar store presents a more professional image, and therefore is a bit safer, than the guy operating out of his basement.
And “GunSensus” goes straight for the old “She’s a WHORE!!!” defense. I mean, what can you say about this? There’s no other way to describe the disgusting Tweets than that. According to this troll, Emily Miller, a relatively pretty woman who wants a gun and happens to hold conservative beliefs, is an attention seeking whore who should be treated exactly as if she stripped her clothes off and posed naked in a skin mag. That kind of gives you a window into how “GunSensus” views women, doesn’t it?
The thing is, these aren’t attacks designed to hurt Emily Miller. They might, but that’s not the point. These attacks are designed to tell other women that certain beliefs and actions are Not Acceptable™. They are telling other women, don’t get a gun, and especially don’t complain about the absolute idiocy of the DC gun buying process. If you do, they say, we will treat you as if you are a crazy whore, and we will do everything in our power to hurt you and embarrass you in front of your family and friends.
I think that this attitude tells you everything you need to know about how the gun grabbers view women. They think women are property. They think women who don’t hold the approved views are crazy whores who deserve the modern equivalent of public exposure at the stocks. These gun grabbers are the exact moral equivalent of the witch burners in Salem.
And Emily? Welcome to our side. If you didn’t think you were on our side before, your enemies have decided to make sure that you knew you were on the side of us lunatic insurrectionists. I’m sorry you have to deal with the blind hatred of people who will never bother to know you. As far as they are concerned, the fact that you want a gun makes you an unperson. The fact that you exposed their anti-gun policies in our nation’s capitol makes you this month’s Emmanuel Goldstein. You’re getting your daily dose of Two Minute’s Hate. It might be difficult to deal with if the gun grabbers had any power.

This entry was posted in Gun rights philosophy, Ladd is a Lunatic, National Politics, People being Jerks. Bookmark the permalink.