Posted on May 3, 2012 by Sean D. Sorrentino | Comments Off on Fayetteville PD puts gangs on Double Secret Probation
The Fayetteville Police Department has hit upon the ultimate solution to crime. The restraining order!
The Fayetteville Police Department obtained a court order on Thursday that told local gangs to quit breaking the law and to stay away from the annual Fayetteville Dogwood Festival over the weekend.
(Grumpy Old Man voice)
Hey, all you kids, stop breaking the law!
Ammons [the Judge] told the gang members to:
Stay out of the Dogwood Festival area downtown this past Friday through Sunday.
Not to break the law.
Not to allow others to break the law.
If they violate his order, they could be found in contempt of court and subject to punishment, such as jail time.
The order expires Sunday, and a hearing on what to do further is scheduled for Monday in Cumberland County Superior Court.
This polar bear tells you what he thinks of this plan. 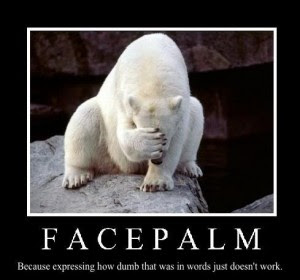 The (Anti) Hero of Canton gets a well deserved boot

Posted on January 11, 2012 by Sean D. Sorrentino | 6 comments
The disgraceful piece of trash that was “Officer” Harless is now in need of new employment. One hopes that since he was fired that he will not be able to get another job as a police officer anywhere.
A city police officer at the center of a controversial traffic stop involving a man with a permit to carry a concealed handgun has been fired.
Bill Adams, president of the Canton Police Patrolmen’s Association, the union that represents Patrolman Daniel Harless, confirmed that city Safety Director Thomas Ream ruled that Harless is no longer a member of the city’s police force.
One also hopes that his appeal fails and he stays fired.
An arbitrator would make a final decision in an appeal, Adams said.
It’s good that we don’t have to send the REAL Hero of Canton in to sort the situation out.
Ht: Johnnyreb
===============================================================
Do you RSS? Don’t know what an RSS Feed is?
Watch this video

This is why only cops should have guns

Comments Off on This is why only cops should have guns

Posted on October 11, 2011 by Sean D. Sorrentino | Comments Off on Detention Officer charged
This morning I posted about an incident where a Mecklinburg County Sheriff’s detention officer took a shot at someone who rear ended him and ran. Well it looks like they decided to charge him.
An off-duty Mecklenburg Sheriff’s detention officer who fired at a vehicle that rear-ended his car Monday has been charged.
(Suspect), who’s been with the sheriff’s office for 13 years, was issued a criminal summons to appear in court for shooting a firearm in the city limits. He’s also charged with an infraction for failure to disclose that he had a valid permit and was carrying a concealed weapon when approached by an officer.
Now I wonder if I’d have got off so lightly, but at least he got charged. You can’t shoot at a fleeing person unless he poses an immediate threat to the lives of innocents.
Police say they located the jeep — a rental vehicle that had been reported stolen — on Monday on Wilkinson Boulevard near Interstate 485. Investigators are still not clear if any of the vehicle’s occupants were struck by gunfire.
Stolen car? That sounds like why they ran. Hopefully they will catch the hit-and-run car thieves. Their explanation should be interesting.
Here’s a thought. If you can’t be charged with failure to register a gun (in states that have gun registries) if you are a felon because that would be a violation of your 5th Amendment right against self incrimination, can you get off on a hit-and-run if your car is stolen? If you stay at the scene, the cops would catch you with a stolen car. Isn’t forcing them to stay at the scene tantamount to forcing them to confess to car theft?
And why is it that criminals always seem to get more rights than decent honest citizens?
========================================================================
Do you RSS? Don’t know what an RSS Feed is?
Watch this video

Comments Off on Detention Officer charged

Let’s say someone rear ends you and tries to drive away. Would you be legally justified in shooting at him? This isn’t an idle question. A Concealed Handgun Permit holder did just that in Charlotte.

What do you do when your rights are violated by a cop?

Posted on September 16, 2011 by Sean D. Sorrentino | 3 comments
How strange. He almost sounds like a firearms rights advocate. Or my dad.
The problem is, if everybody acquiesces to a violation of our rights, do we still have the right? I would argue that unless the right is exercised, it doesn’t exist. Therefore, when a law enforcement officer is enforcing laws that don’t exist, it is incumbent upon us to stand up for our rights.
What’s really strange is that he’s talking about bicycles. Two guys were out riding their bikes and got harassed, tasered, and beat down by a cop who thought bikes should stay off the road.
RTWT. It will remind you that we aren’t alone in this problem.
Ht: Radley Balko
========================================================================
Do you RSS? Don’t know what an RSS Feed is?
Watch this video

I wonder what the punishment for 1500 guns would be?

Comments Off on I wonder what the punishment for 1500 guns would be?

Gay basher not properly dealt with in Asheville?

Posted on July 21, 2011 by Sean D. Sorrentino | 2 comments
Asheville, NC is widely considered a really gay friendly place. So why did this happen?
Asheville police plan to charge a second person in connection with an assault last week that investigators labeled a hate crime.
The second person is 15 years old, so no name has been released, but the first suspect has been charged with felony Assault Inflicting Serious Injury. Not surprisingly, a person who thinks it’s appropriate to punch a guy in the face because he thinks the guy is gay is a person who seems to have a cavalier attitude about following other social norms.
What’s more disturbing is the fact that instead of arresting the suspect, he was cited and released.
Hankins [the victim] went to the police station later Thursday to ask about the investigation and learned that the officer who responded did not file a report, Welch said.
An anonymous tip helped police locate the suspect. (Suspect) was released on a written promise to appear in court.
In what other situation would you be able to punch a dude in the face, causing broken bones, and then walk on a “promise to appear?”
Contrast this outcome with the situation that happened in DC and reflect for a moment on the fact that in North Carolina, unlike DC, you can actually get a permit to carry. When people get together in groups for the purpose of attacking anyone, they deserve to be shot.

Do you RSS? Don’t know what an RSS Feed is?
Watch this video

Posted on May 31, 2011 by Sean D. Sorrentino | 2 comments
Let us specify up front that if these allegations are correct, the trooper should be fired.
A state trooper has been assigned to desk duty after a Catawba County judge issued a domestic violence protective order requiring him to stay 100 yards away from a former girlfriend.
According to court records, the woman contends that Senior Trooper Sean “Bobby” Lineberger stalked her in his patrol car and that he ran checks on the license plate numbers of people she spent time with.
In her court filing, Erin Lee Banks included pages of text and Facebook messages in which the trooper called her a “whore” and other derogatory names, even as she repeatedly asked to be left alone.
Banks also claims Lineberger bought her drinks at a Mexican eatery where he asked her to date him again. After she declined and left in her car, Banks claims Lineberger had another trooper pull her on her way home.
If that’s what he really did, then his swift and ignominious exit from the State Highway Patrol is nothing more than he deserves. At a minimum his best friend would also deserve the most severe sanctions short of dismissal.
Of course, then I read about what she did.
In a lawsuit filed in December, Lineberger claims Banks falsely told him he was the father of her baby born last summer. The trooper was identified as the baby’s father on the birth certificate and the child has his last name.
But Lineberger claims he grew suspicious because the infant “does not bear any resemblance to” him or his family, so he had a DNA test performed. The results ruled him out as the father, according to the complaint.
Um, WTF? According to the story, the trooper alternated between demanding repayment of child support and getting back together.
It sounds to me that they both deserve each other. She works for Catawba County, in the Justice Center. I think that we would do well to dismiss both of them.

Posted on May 21, 2011 by Sean D. Sorrentino | Comments Off on Teh ebil Airsofts
Did you know that the police in Avondale, Arizona have so conquered crime that they now have time to go undercover to seize Airsoft guns?
Avondale police seized 17 replicas of military-style weapons and want the public to be aware of the dangers the weapons pose, authorities said.
All of the weapons, which were seized during a traffic stop that was part of an undercover operation, either are fake or air-soft weapons that fire plastic pellet, Avondale police spokesman Reuben Gonzales said. They appear so realistic in size, weight and other physical characteristics that “they could fool even the most savvy gun enthusiast.”
What’s going on in Avondale? Have they given up on dangerous crime and instead are focusing on Airsoft kiddies?

Comments Off on Teh ebil Airsofts