Category Archives: Junk on a Bunk

My rifle is finally complete

I’m excited. I just finished my brand new Templar Custom AR-15. I’ve been working over at the Templar shop, sweeping up, handing tools, and processing brass. I’m likely to be reloading LOTS of .223 ammo over the Christmas holiday. All that hard work has paid off. I don’t get money, I get paid in rifle parts. Bob even hand painted the camo pattern for me.

I will eventually use a photo of this rifle to replace the one at the top of the page. That rifle is Bob’s personal rifle.

I’m sure it will come up, so here are the parts.

Current unloaded weight is 7lbs 4.5oz. It should be capable of 1MOA accuracy. I will need to tighten up on the loose nut behind the trigger before I see that kind of accuracy though. I’ll be taking it to the range on Tuesday to sight it in.

Not pictured are the sights. Currently I’m borrowing some back up iron sights, but I plan on installing some fixed Troy BattleSights or something similar along with an EOTech sight. My thought is that all the cool carbine classes seem to want you to leave your iron sights up while using your EOTech or Aimpoint, so why get folding sights? It’s just one more thing to break. Given that I’m basically Shleprock with my equipment, I should go with things without too many moving parts.

This will be one of two rifles eventually. This rifle only has one barrel. The Templar rails allow you to swap out barrels, so I think I will be getting a .50 Beowulf barrel from Bob. Why? Because I can. I think it would be neat to be able to hunt bear or moose with an AR. Not that I actually plan on hunting bear or moose, but it never hurts to be prepared for any eventuality. Plus it’s cool. Ask anyone who has fired a .50 Beowulf. Just don’t put your nose up against the charging handle. Learn from my fail. I am also thinking about getting a 300 Blackout barrel. I know that I can hunt deer with a .223 here in NC, but I might want the larger caliber anyway.

You can see, with .223, 300 Blackout, and .50 Beowulf, this rifle is basically a short range rifle. I can shoot all of them with iron sights or with a zero power optic. The second rifle will be pretty much the same as this one, with two small changes. I want a pair of 18″ barrels, one in .223, the other in 6.5 Grendel. Secondly, I want a nice scope. That would make a fantastic long range rifle.

For those who haven’t seen it before, here’s a video of how the barrel change system works.

And if you’re wondering, does removing the barrel shift the bullet impact? Not really, no. At the link you’ll see the results of the barrel remove/reinstall test at 200 yards. The groups overlapped each other.

Posted in Junk on a Bunk, Templar

Back from the gunsmith

Posted on December 3, 2011 by Sean D. Sorrentino | 3 comments
Sometimes I hatses the interwebs. I watched a video that told me that I was capable of installing a Volquartsen trigger on my sweet new Ruger 22/45 pistol. I was promised the moon and the stars, a fantastic trigger pull and no more ignorant magazine drop safety.
Yeah, about that install…
Just in case you were not aware of this already, the internet lies. Unless you are already familiar with how to disassemble the trigger group on a Ruger 22/45, don’t even attempt to install the new trigger yourself. I thought to myself, “hey, I installed the trigger, firing pin, extractor, extended mag release, bolt release, and buffer on my Appleseed 10/22 rifle, how hard can the 22/45 be?”
Disassembly was easy. Disassembly is always easy. Instead of having a sweet trigger on my sweet little pistol, I had two bags of small parts and a gun shaped sculpture. Luckily, my gunsmith was up for the challenge.
Here’s the pistol all put back together. 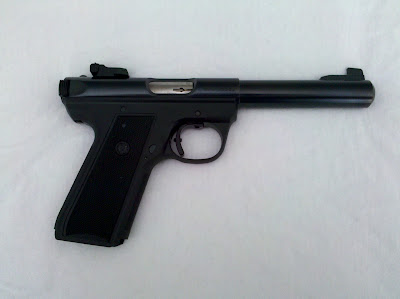 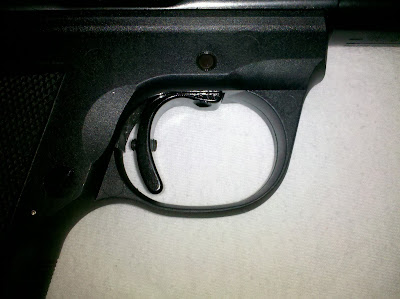 Posted in About me, Junk on a Bunk, Liberty Training Rifle, Product Testing 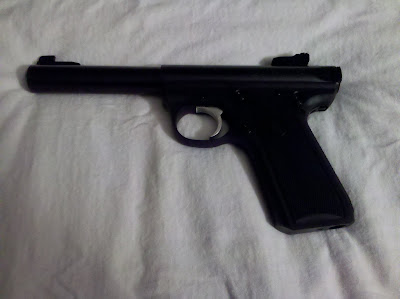 Posted in Junk on a Bunk