Comments Off on HB-650 Page

Roberta was right. I was wrong. Mea Culpa

Posted on January 21, 2011 by Sean D. Sorrentino | 8 comments
Roberta warned me. I didn’t listen. Stupid me.
When you go debating an anti, you are teaching them. Knock it off! Address their questions and concerns, if you must, on your own blog where they are unlikely to go. In the spaces they control, you’ve got to cut them off at the knees. Don’t touch their asinine points, don’t give them new factiods to miscontrue or practice at framing their hoplophobic, nannying notions. Instead, hit our hard truths — ask them Joe Huffman’s Just One Question, ask why it is they don’t want skinny cheerleaders, grannies and gayboys to be able to fight back when baddies try to beat them up, why a retired African-American man should be denied the right to defend his home and family from thugs. Make them confront their wickedness because the antis are in the wrong; they are against human rights and they empower thug rule, bullies, beatings. And we need to call ’em on it. Every time. Every damn time.
I’m done with japete and Baldr. These two have no intention of changing their anti-gun opinions. They think we are stupid and that they are here to educate us, to bring us into the light. I have deleted them from my RSS feed reader, and I will not be following their comments like I have been previously. I’m done sending them traffic, and it would be nice if everyone else stopped as well. I think it’s time to let them wither away. Japete claims that she writes for an audience larger than us “gun guys.” Well she can see if they can fill up her comments section.

Posted on January 9, 2011 by Sean D. Sorrentino | 3 comments
If you are reading this on the blog itself (as opposed to in an RSS Reader, like Google Reader) you may notice a few changes. When I got an influx of readers due to Ashley Smithwick, several people complained that it was difficult to read my hyperlinks as they were purple on a black background. I attempted to change the color of the hyperlinks. Unfortunately, I found that they were purple not because I specified they should be purple, they were purple as an artifact of the cut and paste process from MS Word. I spent all of Saturday rebuilding all my blog posts to get rid of these artifacts. What a pain in the behind. I probably put in about 8 hours of work cleaning up 146 posts. The good news is that I can change the color scheme in any way I like now. I have specified that hyperlinks will now be green, which shows up pretty well against the black background.
Another “problem” that occurred with the sudden influx of Ashley Smithwick readers was my “Popular Posts” gadget suddenly was filled with Ashley Smithwick posts. Prior to the first Ashley post, my most popular post had a little over 5,000 views. The second had about 1200. 4 different Ashley posts were linked by Instapundit. One hit a little over 4000 they rest went over 6000. The highest hit over 15,000. To solve this problem, I have created a gadget that shows all of the Ashley posts in chronological order. I have also updated the “Important Posts” gadget with some more posts I think are of interest. Included in that is a page entirely devoted to my “Laws of North Carolina that need to change” series.
The upshot of all of this is that I haven’t even read my Google Reader feed. I don’t have any real content beyond this explanation of the slightly improved look. So if you have reached the end of your part of the internet, check out my blogroll. All of them have interesting things to say.

A quick note on the color scheme. I cannot control the link colors. It is an artifact of Word. I’ve tried to get Blogger to change the link colors and it refuses to do so. If anyone has any ideas, let me know.

A little gunblog “Inside Baseball.”

Posted on October 25, 2010 by Sean D. Sorrentino | Comments Off on A little gunblog “Inside Baseball.”

There are many different blogging styles. Some people bombard you with information. Others show you all the cool links. And some (who shall remain linkless) just act like a**holes in your comments hoping that you will follow them back to their blogs and “debate” them. They even go so far as to add “co-bloggers” whose only purpose is to try to dig up information about their rivals and post it. This is the story of one such co-blogger.


For those who know and *love* him, enjoy the following video. Narcissistic jerks don’t make me angry, they just make me laugh. Now you can laugh at him too. Rated PG-13 for language.

I post under my real name. This is my real life. I’m laughting right now.

Comments Off on A little gunblog “Inside Baseball.”

Anatomy of a Tertiary Instalanche on a 3rd tier Gunblog

Posted on October 17, 2010 by Sean D. Sorrentino | Comments Off on Anatomy of a Tertiary Instalanche on a 3rd tier Gunblog
Today I was treated to an example of what getting linked by Instapundit’s Glen Reynolds is like. This blog has been open for business for about 2 weeks. At best you, the generous reader, could class me as a third tier gunblogger. I’ve been linked a few times, leading to a few spikes. Today at 8:13 am, Instapundit posted
SAME PLANET, DIFFERENT WORLDS.
This links to
Same planet, different worlds﻿,
at SayUncle.com which refers to
Quote of the day—Sean D. Sorrentino
at Joe Huffman’s “View from North Central Idaho.” which links to my post (really, a comment on my post)
Why ignorant people should not make law
here’s the result in graphical form
﻿﻿

﻿﻿In order to get to my post and affect my sitemeter, you have to be reading Instapundit and click 3 links in a very specific order. And in the last 24 hours a total of 1,457 people have landed on that post, the VAST majority between 8:13 am and now. Of that 1,272 came through that three link route. 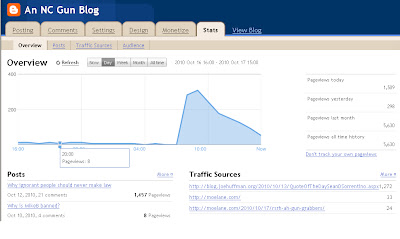 Why is MikeB banned?